In order to accurately measure a dairy farm’s feed margin, it’s important to consider the herd’s total feed requirements to produce a given quota.

Very often, when analyzing the economic performance of dairy farms, an effort is made to find a correlation between different production levels and the feed margin in order to have a target or magic number to aim for. The problem is: For a given production level, some farms are among the best when it comes to feed margin per kilogram, while others lag far behind. There are therefore no obvious conclusions and, often, the production level is even singled out as a negative factor in the achievement of a better margin.

It is possible to have an excellent margin per kilogram regardless of production level. However, since the margin per kilogram, multiplied by the number of kilograms produced, is what ensures a good farm income, producing your quota is a key variable. Moreover, if you have a good margin from the outset and your production level increases, there will be a considerable impact on the number of animals in the barn (there will be fewer), which can even further improve your margin.

Consider, for example, farms with 1.3 kilograms of fat produced, as illustrated in Figure 1. Why do some have a margin herd of $9.50, $10.50 or even $11.50? Clearly, the production level does not guarantee the margin per kilogram with absolute certainty, even though the correlation is positive. Another factor to consider is the net income once the costs of producing this kilogram of fat to be sold (e.g., $18) are deducted. The levels of protein, lactose and other components of milk are important factors in the margin, from which the total costs per kilogram of the herd (e.g., $7.50) will be subtracted.

It is possible to produce 1.3 kilograms with one, two or three groups on total mixed ration (TMR), with individual cow feeding or with partial mixed ration (PMR) supplemented at the robot, with 140 days in milk (DIM) or 220 DIM, or with 20% or 45% from first-calf heifers. There are several possible feeding combinations, but if your rations support an average production of 40 litres per cow and the actual milk produced is 32 litres per cow, the cost per kilogram will be high, which will negatively impact your margin.

In addition, if the rations are perfect in terms of least-cost formulation, but the limiting factor is not taken into account and the rations are not converted into milk and farm components, the results from a margin standpoint will be disappointing (e.g., if a transition program is unsatisfactory, failing to promote healthy calving production and maximize peaks, or if there is a lack of comfort, problems with hooves, issues with water quality and quantity, silage with poor fermentation profiles, inadequate trough management or inconsistent rations).

Several factors can help explain the differences in margin for farms with the same production level. Some farms could produce a great deal more with the rations served, since rations are not the shortest plank in the barrel. For others, rations are the limiting factor for increased profitability. An efficient farm with a good margin of 1.2 kilograms of fat produced would likely succeed with 1.3 or 1.4 kilograms, since the ultimate goal is first and foremost to generate the best margin per herd for a given production level.

Once achieved, an increase in production can easily translate into greater profitability. If it were possible to have three identical farms in terms of management, environment and genetics that produced 1.2, 1.4 or 1.6 kilograms of fat, respectively, the margin per kilogram would likely resemble Figure 1, with the margin increasing slightly from $10.50 to $11 per kilogram. For a 100-kilogram farm, that’s a difference of $50 per day or $18,250 per year. The difference is mainly the result of the total number of animals to be fed, but the main impact on the overall profitability of these farms must be measured on far more than feeding.

If we aimed to lower the cost of concentrates per kilogram, while accepting a production decrease to 1.4, 1.3 or even 1.2 kilograms of fat, what would the impact be on the total number of animals in the herd? 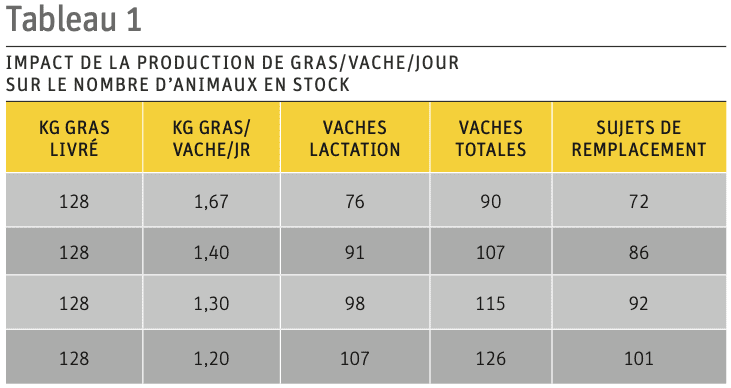 According to Table 1, 65 additional head (including 36 cows) would be needed, using a scenario- based tool. More cows result in higher income from the sale of heifers, calves and cull animals but also higher costs to feed the herd, as well as higher housing, insemination, drug, veterinary and labour costs, among others. Taking the example of 1.2 kilograms of fat produced, an annual negative impact of $39,330 results from an additional 65 head in this scenario. Labour is included in the calculation.

Farmers who want to improve their feed margin and the farm’s remaining balance have to be able to clearly identify the starting point and measure their performance using effective tools that take our reality, namely quotas, into account. The cost per kilogram of fat is how feed costs are measured. The margin per kilogram of fat multiplied by the number of kilograms produced is how feed margin is measured.

However, in addition to the feed margin per kilogram are the costs associated with the number of animals, whether more or fewer, needed to produce the same quota. They will have an impact on the farm’s remaining balance. It’s definitely important to always pay attention to feed costs – but without compromising income. After all, isn’t the ultimate and most important goal to obtain the best possible remaining balance by producing a quota with the best margin per kilogram while managing overall expenses?