The Roots of Ferme Val-Bisson 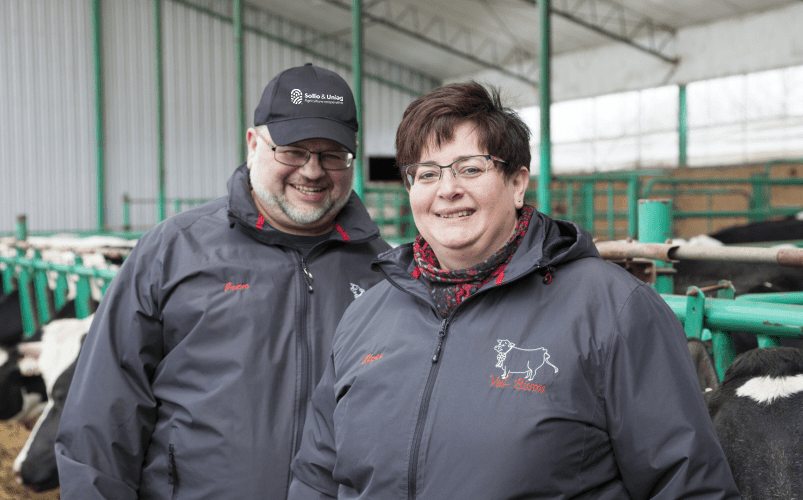 Through more than five articles, the Coopérateur has had the chance to see Ferme Val-Bisson grow and transform, from 1975 to 2020. The moments, fixed by a few pages in time, allow us to rediscover the path taken, but, above all, to realize that the founding vision endures and revolves around three major fundamental axes: curiosity, reflection and training. Text by Stéphanie McDuff

Curiosity as a source of innovation

Right from the beginning of the farm, in the 1950s, Gilles Bissonnette made the neighborhood gossip when he decided to borrow money to drain his land in Saint-Polycarpe and plant alfalfa. At the time, owing money was looked down upon! However, each year, the drainage paid for itself and proved the farm’s founder right.

“They were inspiring, my parents, says Jean Bissonnette, son of Gilles, administrator at Sollio Groupe Coopératif and first vice-president of Uniag Coopérative. My father was close to the agronomists at MAPAQ, who were the sources of knowledge at the time.” He was also a reader and liked to browse through American magazines. It was from these that he got the idea of a management chart, which did not yet exist in Quebec. To create his own, perhaps the first in the province, Gilles Bissonnette drilled every hole, created every pin and reproduced what he had seen.

This desire to innovate, combined with a constant questioning and an insatiable curiosity, continues to inspire the farm’s current owners, Jean Bissonnette and Elyse Gendron. For them, there is no question of being satisfied with the status quo since there is always something to improve.

Reflection – and the right to change ideas

Projects and ideas are constantly being stirred up at Ferme Val-Bisson. In the 2009 edition of the Coopérateur, Jean said, “We need expert-advisors to stimulate us and make us dream.” And even today, he adds, “Being ahead of the curve means being aware of what’s going on around us. The people involved like the vet or the consultants know we like to be challenged and they need to bring us different ideas.”

While some ideas are immediately adopted, others are put aside. That’s not to say that a few months or years later they won’t be revisited. “And just because something didn’t work doesn’t mean we won’t try it again, explains Jean. We’re not scared of that! I’m thinking, for example, of fall rye, tested in the early 2000s, which didn’t give the results we expected for food purposes. However, for the past three years, we have been trying it again and we have had very good results. For the green side and the land use, it is wonderful. So we’re simply not doing it for the same reasons as before.”

Training to open up to the world

This flexibility in working methods and ways of thinking is based on critical thinking fed by continuous training. Knowledge, as Elyse affirms, is not a finite thing. “You always have to question new techniques, to see if they are applicable or not.” Yet, to choose them, you must know they exist!

The importance of training was already evident in 1975. Gilles Bissonnette felt that it was partly due to his specialized training in agriculture that he was able to understand the value of new production methods and apply them. The apple didn’t fall far from the tree, as Jean adds, “The training allows you to pull everyone up and open yourself up to the world. I’ve never seen a person who went through training that dragged them down.”

Training, webinars and networks of contacts are constantly put to use by the two producers (at Sollio Groupe Coopératif and Uniag Coopérative for Jean, and at the CRAAQ or Holstein Canada for Elyse). Nothing is more refreshing, they say, than to talk with the administrators of these organizations, who are all good, forward-thinking farm managers.

A vision that pays off

The desire for continuous improvement has driven the changes at Ferme Val-Bisson and led it on the path to productivity. The numbers speak for themselves: in 1975, the farm had 62 milking cows for an average production of about 6800 kg; in 2020, it had gone to 65 milking cows, but 13,000 kg! How did the farm go from one to two?

“The approach is always somewhat the same, says Elyse. You always have to ask yourself what the next limiting factor is, the one you have the least control over and that will determine the final performance.” To think about productivity, you have to improve on all fronts: genetics, forage and feed quality, management and building. Everything must work well to get good results and, above all, to be profitable, specifies the producer.

Among the possible limiting factors is genetics, mentioned in the 1989 article. “Herd segmentation, working with the best and their multiplication, embryo transfer: that’s how we worked and obtained successes,” adds Jean. The method has changed over the last 30 years. Now, cows with less genetic merit are bred with beef bulls.

Analysis and comparison have also long been part of the two producers’ strategies, and in the early 2000s they created an in-house database to integrate information from various sources and generate lists. Their partners’ computer systems were then gradually added to their toolbox, including AgConnexion and Lactascan, which “we adore,” says Jean.

Today, Ferme Val-Bisson ranks as one of Sollio Agriculture’s top performing farms for dairy performance. When asked where the next limiting factor is, Elyse and Jean mention improvements in dry cows, including ventilation, stress reduction and improved exercise levels. Will the buildings be touched? “We’ve been expanding from ‘within the walls’ for several years,” concludes Elyse. So, it’s not on the agenda, but who knows… With their eyes always set on improvement, the future is yet to be written!